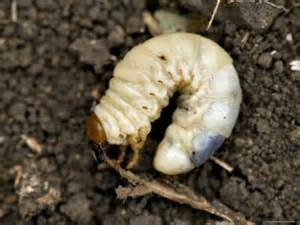 How to you rid your lawn of those pesky lawn grubs?  Here are a few tried and true methods.

Have you heard of beneficial nematodes, microscopic organisms that can be applied to the soil from a hose-end sprayer? These little guys have to be applied here in mid June and in the early morning or late afternoon. They are available at a hardware store in York.

Some believe milky spore will take care of the problem, but milky spore takes two to three years to begin working and so you have to deal with grubs while the milky spore inoculation period becomes effective, nevertheless, people have found milky spore effective.

You might not have heard of the Tachinid fly, introduced into America in 1922 from Japan to combat Japanese beetles in America.  The fly glues its eggs to the back of Japanese beetles, and then the larva hatches within 24 hours and bores into the beetle to feed.  These flies that look can look like your ordinary old house fly only feed on Japanese beetles – kill the beetles – and you won’t have any grubs.

One of my jobs as a kid, was to pick off the Japanese beetles and pop them into a jar with a few inches of gasoline – maybe not the best idea, but it worked. The fewer Japanese beetles, the fewer eggs they’ll lay to become grubs.

Of course the best way to deal with grubs is have a well fed, organic lawn with deep roots – that means, forgetting the daily watering –watering only when needed – and feeding your lawn with good organic material.