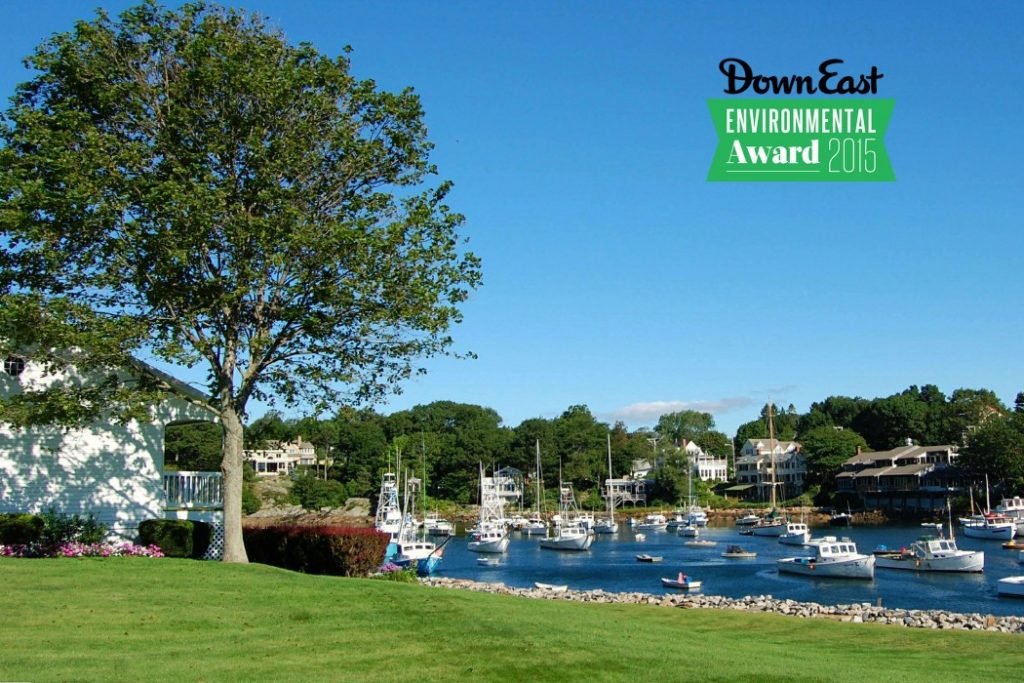 It is not a stretch to say that the American organic movement has its roots in Maine. Rachel Carson was a well-established summer resident of the Boothbay Harbor region when her book, Silent Spring, first warned the nation about the dangers of overusing pesticides in 1962. And the rich food scene Mainers enjoy today largely owes its existence to the Maine Organic Farmers and Gardeners Association, which began advocating for pesticide-free, locally grown foods way back in 1971, when such ideas were considered eccentric, even subversive.

No doubt some property rights advocates and the lawn chemical industry will apply the “subversive” label to Ogunquit’s precedent-setting lawn pesticides ban, passed in November. But it is precisely because the ordinance aims to protect all residents from toxic chemicals that the editors of Down East are proud to award the 33rd Down East Environmental Award to the town of Ogunquit.

On a spring afternoon four years ago, Bill and Judy Baker arrived at their home on Ontio Hill in Ogunquit to find a yard worker spraying their lawn with a pesticide. The problem was, they hadn’t hired a landscaper. “He’d made a mistake,” Bill Baker recalls. “He was supposed to be spraying a neighbor’s property.”

Concerned, the Bakers researched the effects of common lawn and garden products, and they didn’t like what they found. “Some of the chemicals seemed hurtful to birds, animals, and people, not just pests,” Baker says. “We felt they might be a problem for our town.” The Bakers contacted Mike Horn, chairman of the Ogunquit Conservation Commission, and learned they were not alone.

“People were coming to us, saying, ‘We choose not to use pesticides, but our neighbor is spraying stuff, and it’s coming into our yard,’” says Horn, whose commission was the driving force behind a then-new ordinance banning pesticides and chemical fertilizers on town-owned land. “We decided that our next project would be expanding our ordinance to include private property.”

So it was that the seed was planted for a trailblazing town-wide ban on pesticides passed by Ogunquit voters in November. Ogunquit is the first community in Maine and the second in the United States to prohibit the use of synthetic insect killers, weed killers, and fertilizers on all land — private and public — throughout its jurisdiction (Takoma Park, Maryland, banned cosmetic lawn pesticides in 2013). “Ogunquit has shown itself to be a leader on this issue nationally,” says Jay Feldman, the executive director of Beyond Pesticides, a Washington, D.C., organization founded in 1981 as a clearinghouse for information on pesticides and an advocate for pesticide-free land and building management practices. “Mike led an extraordinary process. The commission went to great lengths to investigate the issue and educate themselves.”

At just 4.2 square miles and a population of around 1,200, Ogunquit is the most densely settled town in York County, and its economy is almost wholly built on its natural — and manicured — beauty. On any given summer day, the town fairly bursts at its seams as an estimated 16,000 people crowd its picturesque village, sandy beach, and Marginal Way, a spectacular mile-long oceanside path. Welcoming them are roughly 40 restaurants and 75 hotels, motels, inns, and B&Bs. To prohibit lawn-beautifying products routinely used across the country by businesses and homeowners is no small matter here.

Ogunquit is the first community in Maine and the second in the United States to prohibit the use of synthetic insect killers, weed killers, and fertilizers on all land — private and public
But Ogunquit, with its vibrant artistic community and LGBT-friendly atmosphere, is well known for its open-minded, progressive attitudes. The Conservation Commission has been encouraging businesses and residents to promote Ogunquit as a “green” town since 2007, when Meadowmere Resort displayed a flag announcing its new green business certification from the Maine Department of Environmental Protection (the resort earned it by adopting a number of green practices, from installing a solar hot water system to eliminating aerosol spray products in housekeeping). Today, 11 Ogunquit lodging properties and restaurants display DEP’s Environmental Leader logo — more than any other community.

The pesticide ban is not just about bragging rights, of course. Two years ago, the Conservation Commission obtained a $100,000 federal grant to monitor bacterial contamination in the Ogunquit River. While only trace amounts of pesticides and fertilizers were found, the study underscored one of the commission’s biggest concerns: “We’re bounded on three sides by water,” Horn says. “Everything runs down to the sea, and those chemicals eventually end up on our beaches and in our river.” Last summer, a yard worker inadvertently illustrated that point when he fertilized a lawn just before a rainstorm. The rain washed the fertilizer to the shoreline, temporarily tinting the sand and rocks a brilliant green. “People were alarmed,” says Bill Baker, now a Conservation Commission member himself.

To educate the public before the vote, the commission offered several workshops. Feldman and Beyond Pesticides board member Chip Osborne, a natural turf management expert, spoke about the links between common pesticides and cancers, endocrine disruption, and other abnormalities. Critical support, says Horn, came from John Bochert, a longtime organic gardener and the lawn and garden manager at Eldredge Lumber and Hardware, which has stores in York, Kittery, and Portland. In 2013, with owner Scott Eldredge’s encouragement, Bochert banished neonicotinoids, a class of insecticides implicated in the collapse of honeybee colonies, from the stores’ shelves. This year, Eldredge will stop selling Roundup, the world’s top-selling herbicide, whose ingredients have been linked to birth defects in the embryos of laboratory animals.

Still, the pesticide ban was not a slam-dunk. In 2013, the measure failed by just seven votes, prompting the commission to tweak the language so it was clear that the ban did not apply to chemicals used within the home. The revised ordinance, passed 206–172 at last June’s town meeting, was voided by the Maine Board of Pesticides Control because it had not been given sufficient time to review it. In November, the ordinance passed again with a decisive 60 percent of the vote (the tally was 444 to 297, with nearly two-thirds of Ogunquit’s registered voters participating).

This spring, both Feldman and Bochert will be back in Ogunquit to lead workshops in natural turf management practices that they say are superior to chemical pesticides and fertilizers. “That is the beauty of this: we’re not putting anyone out of business. The ordinance is providing lawn service businesses with opportunities to develop these sustainable practices,” Feldman says. “Ogunquit is a model for what will happen across the country.”

Ogunquit has inspired Down East to stop using chemical pesticides and fertilizers at our offices in Rockport. We will publish reports on our progress as we transition to organic turf management.

Photo credit: JR P | Flickr. This image is available under a Creative Commons license and was modified with the addition of our Environmental Award insignia  Origianal article appeared in DownEast Magazine https://downeast.com/ogunquit-leads-the-way/